Nodes on The Coop Network 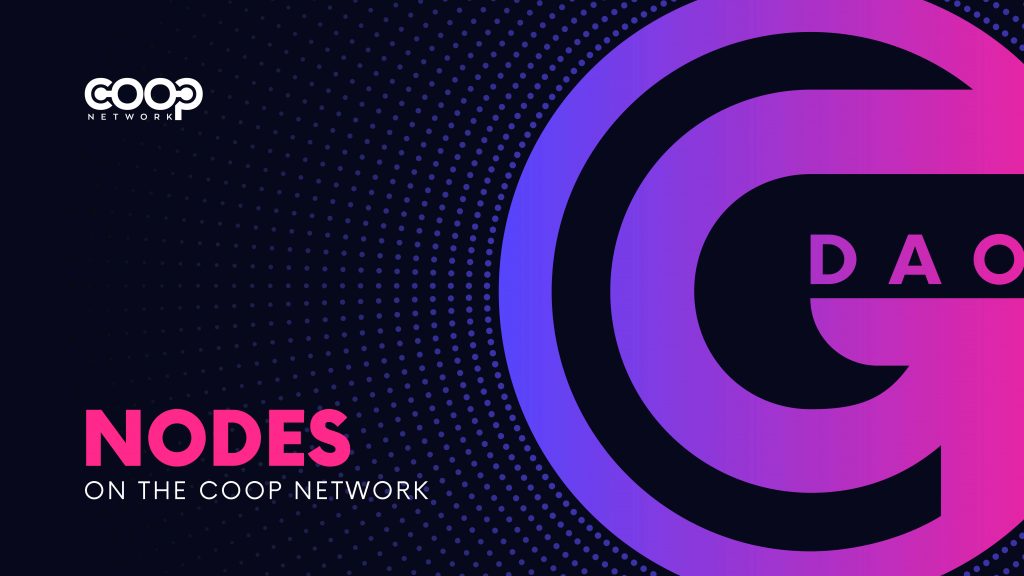 Imagine a decentralized network, where nodes work together to maintain and develop the system. We do it every day. The Coop Network is more than a blockchain project, actively working towards decentralization and creating a more equitable future, grounded in the real world.

In this article, we’ll look into the benefits of Proof-of-Stake systems, as well as into the whys and the hows of running nodes on The Coop Network. The 15% APY is just one of the reasons. So let’s dive in.

Proof-of-Stake (PoS) use and advantages

The Coop Network is a 100% Proof-of-Stake blockchain, which holds a number of advantages.

Firstly, it consumes way less energy than the mining process in a Proof-of-Work blockchain, since there is no need for specialized hardware and large amounts of electricity. Secondly, PoS is much more secure and reliable than PoW. It allows for faster transactions and lower fees, because there is no need to compete for rewards. PoS also allows for a greater level of decentralization, since nodes are not incentivized to join or leave the network based on their profitability. Instead, they remain active as long as there is an economic incentive for them to do so.

In the Proof of Stake model used by GMD, the security is ensured by peers having a stake in the network. The incentives provided through this algorithm do not promote centralization in the same way that Proof of Work algorithms do.

Forging on The Coop Network

GMD is the currency of the Coop Network. GMD is redistributed through the inclusion of transaction fees which are awarded to an account when it successfully creates a block. This process is known as forging, and is similar to the mining concept employed by other cryptocurrencies. Transactions are deemed safe after 10 block confirmations, and the current architecture and block size cap allows for the processing of up to 367,000 transactions per day.

Running nodes on the Coop Network

Beside staking, GMD holders can earn rewards on the Coop Network by running trusted nodes on our blockchain. Firstly, you have to buy & hold 2000 NOD (NodeCoin) from the Monetary System of our blockchain using GMD (NOD is 1:1 with USDT). Secondly, you need to receive the hallmark status for your node after you pass a KYC process. The base reward for the participants who choose to run nodes on the Coop Network will be a 15% APY in the first year. On top of that, the forged balances, representing the transaction fees collected on the Coop Network, will be distributed on a monthly basis to all hallmarked nodes.

Since the Network is young and yet to be decentralized, it keeps locked safety wallets for stability and security purposes. These wallets will forge the most, as the consensus algorithm chooses the wallets with the highest stake to validate transactions. With each new node created and hallmarked by the community, 100.000 GMD will be burned from the permanently locked wallets (COOP security wallets).

The node has to run for at least 340 days/year in order to remain eligible for rewards. Unlike other mainstream blockchains, where the cost of running a node can rise up to hundreds of thousands of dollars, a Coop Network node will always cost 2000 NOD (=2000 USDT), regardless of GMD fluctuations. This is meant as a guarantee for equity in time.

Creating a hallmark for a node

A hallmark is a “stamp of approval” for a node running on the Coop Network. It’s a way of verifying that the node is legitimate and has been authorized by the COOP governance council. To create a hallmark, you will need to generate a cryptographic signature based on your IP address, using your account’s secret key. This signature can be used to prove that you are the owner of the node. If this already sounds complicated, don’t worry, our technicians will guide you through the process.

The hallmarks help in preventing attacks and ensure that only authorized nodes are able to participate in the network. Hallmarks are recommended when operating nodes on public servers and are needed for those wanting to earn incentives, but not for the casual GMD owner. They also have no impact on forging.

Note that the software requires minimal system resources to operate. A fully operational node can even run on a Raspberry Pi 2 and is easily affordable.

Through the PoS technology of the Coop Network, the power is given back to the people and they are in control of their own data. It is a more secure and reliable system for decentralized applications, for a few reasons.

The increase in the number of nodes operating on the network is vital for ensuring its security and stability, so we always encourage our community to participate by running full nodes with open APIs. There are benefits on both sides – the network is further secured, while you enjoy financial incentives and the perks of distributed ledger solutions.

Node operation has seen a decrease in adoption for a while, due to the complexity of the setup. For someone who doesn’t have the technical proficiency, the process can be intimidating knowing that it can end in loss of assets if done incorrectly.

Fortunately, on the Coop Network you can set up a node with just a few clicks. Anyone can easily set up a public node on our blockchain without having to deal with complex installation procedures or Terminal commands. You can choose to run a public node from your home on your Windows, Linux or MacOS with an already compiled version. As zero trust is required to run a node on this blockchain, we recommend downloading the code from our repository and compiling it on Linux or MacOS. You will always have the possibility to quickly use our blockchain, either through one of the trusted nodes of the community, or the ones hosted by the Coop Network on node.thecoopnetwork.io (no installation needed for this option).

If you encounter any difficulties with the installation process of your node, you are more than welcome on our discussion forum where our technicians will be able to help and guide you.

Getting NOD, step by step

To get NOD, you need to first purchase some GMD and send it to your Coop Network wallet. GMD coins can be bought through our exchange partners or directly in your wallet with VISA or MasterCard. Once you have your non-custodial wallet set up on our blockchain and have transferred some GMD to this wallet, you may proceed towards buying NOD.

1. Access the blockchain on https://node.thecoopnetwork.io, open the Menu, in the Menu you’ll find “Monetary System”.

2. Open the Monetary System and you will see the coins emitted on the Coop Network. One of them is NOD (NodeCoin). To the right you find the Exchange button.

3. Once you press the Exchange button, it opens the Coop Network’s internal Exchange Booth. Now you can buy NOD with your GMD. The only thing you have to do now is getting your hallmark to run a trusted node on our blockchain. 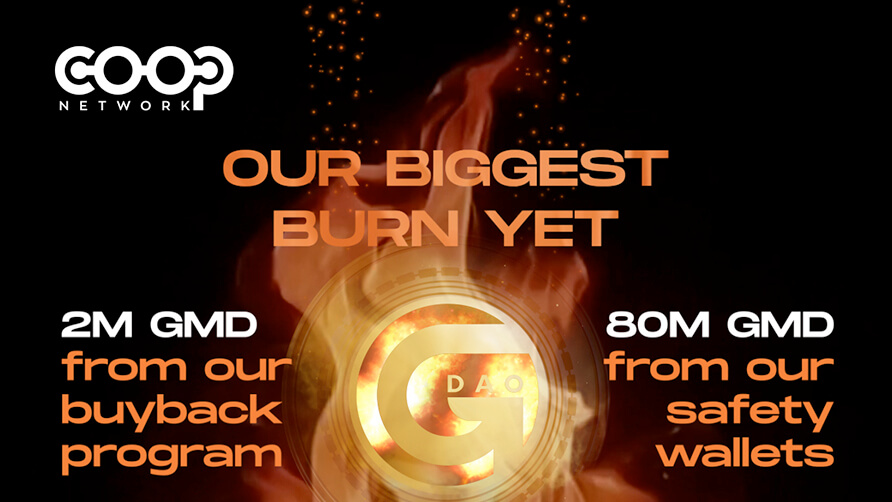 As an incentive for our upcoming node and staking program, we completed our biggest burn so far! That’s another 80M GMD from Safety Wallets and 2M GMD from buyback, turned to ashes. Cheers to deflation! We know it’s been a while. Time runs at a different, much faster rate in the crypto space, but that’s fine - we’re so much more than a crypto project.